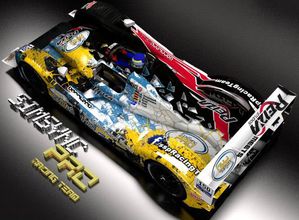 I’m very happy to announce that we finished 7th in our class at the 24h de la Sarthe @ Sim-Racing.org.

After a quite turbulent start with quite a lot of self forced incidents we managed to slowly climb up the classement. While our competitors had some problems with disconnects, we were able to collect some of the positions.

Unfortunatly, our “early sin’s” (damaged and not completely repaired front = 20km/h less top-speed) put us again back in the grid until at around 21:00 CEST in the evening when the server started to make trouble and a restart became necessary. Until than, all of our drivers (Achim Ennenbach, Thomas Kroll and Michael Betz) had driven 2 stints and we were in 10th position.

The restart was again driven by Achim Ennenbach and he was now able to push again, because the car was again completely repaired. He also finally found his rhythmn and was able to drive his laps constantly and without errors.
Due to another server restart, he was forced to stay in the car which was perfect for his “flow”. He was able to push hard and to gain some positions
At 2:15 CEST in the night, another server restart got necessary and Thomas Kroll took over in position 9.

He was able to drive constant times, but a heavy accident incl. a long repair put him back 2 positions. Michael took over the vehicle after Thomas finished his second stint and drove his 2 stints. He was able to close the gap a bit but when he came into the pit to swap to Thomas again, we were still in P11.

Thomas did than another stint and was able to maintain the gap to our competitors until another server crash forced a server restart.

Achim took over for the restart, but the guys were so full with adrenaline, that this restart was quite a mess. Achim spun the car in the Tetre Rouge area and lost some time. Luckily, the damage on the car was not so big, that the performance was hit so hard so we decided to stay out.
Only a few seconds after this self-forced accident, a LMP1 and a Corvette collided at the exit of the first chicane just in front of Achim.
While the LMP was able to continue, the Corvette spun and Achim was able to avoid the crash… but not the other cars behind … It was a huge crash and a lot of cars took damage in that scene. In the following 2 stints, he was able to close the gap and to gain a position.

Than Michael took over and had another 2 great stints with one personal fastest lap after the other. He put the car back in position 8 until we made the last driver swap around 12:30 CEST.

Achim took over again and was able to keep the pressure up on the team in position 7. We were back in the same lap and now attacking them to gain another position. But they fighted back and we were more or less equally.

Around 13:30 the server was restarted a last time. The restart was a bit crowded because the faster cars where starting in the middle of the slower ones and that forces some dangerous situations. But in the end, everything went fine and we found ourself in a 10 sec. distance to the car in P7.

We both pushed hard and everytime we closed a bit, they got quicker and drove another tenth away. Until … they had an accident while lapping a GTE and lost the front hood. We were able to pass them and after they got repaired we had a 2 minute gap which we where able to increase.
At this time, we were nearly 3 laps behind P6 and constantly increasing the gap to P8. So nothing to gain or to loose and we were able to maintain our position until the finish.

I would like to give a big THANK YOU to my co-drivers Thomas Kroll and Michael Betz. Both did an outstanding job and it was a great pleasure to drive with both of you!
Another big THANK YOU goes to our spotter Lutz Ludwig, who helped us very much by keeping an eye on what was going on around us. I’m quite sure that i never would have found my “flow” without his jokes and his ambiguous comments on me and everything around. 😉