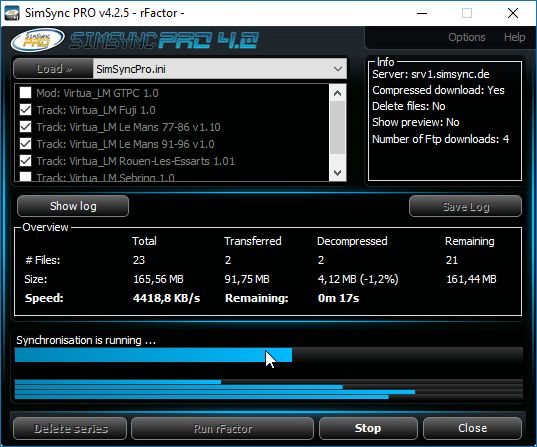 SimSync PRO 4.2.3
=================
* Fixed the "Remove unused files" function, which has been broken a few releases before. Thanks to Fabio from FLANC.ch for pointing into the right direction
* Fixed an error that caused an "No content" error message, even if there was content

SimSync PRO 4.2.1
=================
* Fixed issue with new folder structure of rFactor2
* SimSync PRO is now compatible with .NET 4 and should run now on Win 8 (Win 2012) and up without additional installation of .NET 3.5
* Serieslist scrolls now vertical instead of horizontal as before. This makes it easies to read long seriesnames and is more "intuitive/natural" in it's movement as before.