SimSync.de and International Pro Modding are proud to annouce the release of

rF_HighVoltage is a software which simulates DRS and KERS in rFactor. It supports the current Formula 1 (™) rules concerning DRS and KERS, but also supports the possibility to configure it following own rules.
There are already a few solutions on the market, which are developed around the in-game possibilities. But most of them are strugling when it comes to the point to prevent the user from activating KERS when the batteries are empty, or activating DRS when the car isn’t in the required distance to the competitor in front.

Readme & Licence: is able to do all of this: 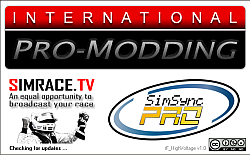 rF_HighVoltage was developed together with Kikoni from International Pro Modding. Kikoni is one of guys behind the famous FSOne modification for rFactor.
While rF_HighVoltage has been tested with the FSOne, it isn’t limited to this specific modification. It’s quite easy to setup other mods to use rF_HighVoltage.