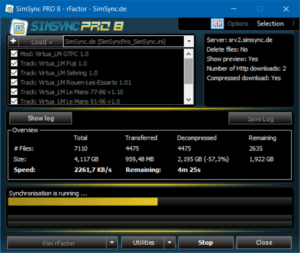 SimSync PRO 4.5 Beta 9
======================
* Fixed an issue in the SteamInfo class with keys written in the wrong case
* Added marker to help debugging an issue in the SteamInfo class.
* Fixed an issue where the number of external programs was not written to the SimSyncProUtils.ini
* Added an option to the "Utilities" button menu to enable/disable the scan for external programs on startup
* Added a "marker" to those programs that have been found during startup to easily identify them in the list.
Once such a program has been configured and the list has been saved, that marker will disappear.
* Implemented sync culture stats
* More optimizations
* Reworked the complete HttpUrlBuilder.cs to use CustomerInfo where possible. Created new method to build the Uri's
* Added CustomerInfo.CustomerId;
* Updated the templates for the SimSync PRO 8 release

SimSync PRO 4.5 Beta 7
======================
* Announcements implemented.
Announcements of the league administration and Global announcements will be displayed
on startup (and will continue to get displayed) until they get confirmed (button at
the bottom of the announcement).
* Supports the use of SteamIDs to protect the content from being downloaded. The series
must be configured accordingly.
* Translations with the help of www.deepl.com and translate.google.com adapted, as well
as other languages (again) added.
* A lot of code optimizations (encryption/decryption, data/object handling)
* Updated the style of secondary windows (filelist, input, info and about windows)
* Switched to a more recent .NET Version 4.7.2 (which ships with Win 10, but is also
available on previous windows version).

… I just want to say that apart from a few early teething problems while people got used to the software the service has been excellent and a worthy addition to our leagues operation. Mis-matches and other file related issues have been non-existent this season, which is a very welcome position to be in. I hope we can look to roll this out further into our wider league structure in the coming months.